This 60,000 sq. ft. roof is located close to the coast and has constant moisture on the protective drain pan under its roof mount HVAC and air handler units. This constant moisture caused the pans to rust through. When the leaks became obvious to the tenant, they simply put a plastic tarp on the warehouse floor beneath the leaks to protect their merchandise, but they failed to repair the roof and flashings causing the leaks. This led to costly structural damage to the roof substrate. At this property, the tenant was responsible for roof maintenance and repairs of the building that they occupied. This is an example of the damage that can be caused by poor roof maintenance. In this case the poor maintenance led to a dangerous situation. One particular air handler was 8,000 lbs. mounted on a wood framed equipment curb. The leaks were obvious and coming through the building for a long time before attention was given to the roof to determine the cause of water intrusion.

The metal drain pans under the air handler unit had completely rusted through and this allowed the moisture to drain directly into the support curbs. The moisture then saturated into the plywood roof deck and caused further substrate damage. The roof and plywood deck was rotten and completely deteriorated under the rusted out drain pan. This damage was not known until the unit and pan were removed. By the time this 8,000 lb. air handler was disconnected and craned off, it was nearly falling through the roof.

Coating these drain pans with the SureCoat Roof System prior to installing the Air Handler unit on top of them would have prevented this damage. By using the SureCoat Roof System, the pan is protected from exposure to air and water which causes oxidation to metal. The drain pan, structural curbs and roof deck damage could have been prevented with the same system that was used to repair it. In this situation a $4,000 preventative maintenance would have saved a $25,000 roof repair.

A local SureCoat Systems’ Approved Contractor was hired to perform the roof repairs using the SureCoat Roof System. The customer chose the SureCoat Roof System over other roof coating systems because it creates a waterproof, monolithic seal that is UV stable and renewable. The cross-linked resins of the elastomeric coating allow for adhesion to all types of metal including galvanized, bonderized, mild steel and aluminum in most cases without a primer. The SureCoat Roof System is a long-term solution for metal HVAC duct, plenum and flashing leak repairs. Sheet metal used to make HVAC duct runs and plenums will rust much like the metal drain pans if left unprotected. The seams of HVAC ducts, roof jacks and other metal on roofs are often sealed with black and gray mastics. These mastics absorb heat, become brittle and split in a short period of time and need constant maintenance to keep the seal watertight. As an alternative, the SureCoat Roof System material is an excellent product to seal metal seams and to protect sheet metal from rust.

Avoid washing your roof repair dollar$ down the drain by asking for the SureCoat Roof System by name! 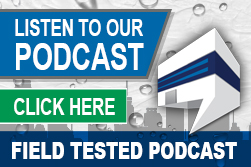